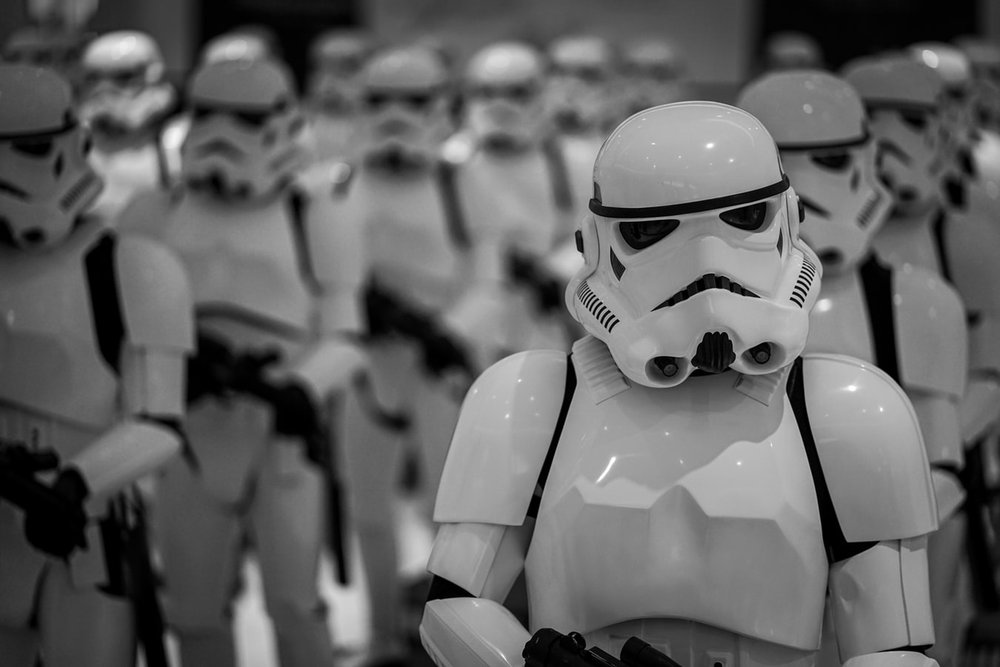 In conjunction of the recent release of, The Rise of Skywalker, the final movie in the Skywalker saga, I figured an image of stormtroopers was in order. I mean, what could better represent ephemeral Jenkins build agents than the massive unending population of stormtroopers who lead ephemeral, short-lived lives (especially when the Jedi are around)?

Here’s the problem: Many organizations have a single Jenkins master and a limited number of build agents with no ability to auto-scale Jenkins to meet delivery team demands. The DevOps team is left guessing as to the number of build agents needed. As more teams onboard onto the pipeline, this scalability issue creates delivery bottlenecks. It’s a serious and all too common challenge for enterprise organizations. In this post, I’ll review the Jenkins problem in more detail and then propose a container-based CI/CD solution for using ephemeral Jenkins masters with Kubernetes.

In many organizations, Jenkins is implemented in one of two approaches: (1) centralized management (top-down effort) and (2) individual team management (grassroots effort).

This first approach involves deploying a single Jenkins master with multiple Jenkins agents that teams use to run their build workloads (typically on physical hardware or virtual machines) completely managed by a centralized team. Essentially, this centralized team attempts to solve and support all permutations each individual delivery team will need from a pipeline (e.g., build/deploy resources and plugins).

In reality, this centrally managed approach doesn’t scale well as the demands for CI/CD grow in the organization. Building, configuring, and maintaining Jenkins agents for all of the organization’s CI/CD pipelines becomes difficult and risky to maintain.  In addition, having a centralized Jenkins master can become a liability for the enterprise because it introduces a single point of failure -- if the single Jenkins master goes down, no team will be able to build, test, and deploy their applications. Limited scalability and downtime for the CI/CD orchestration are very costly. Just as importantly, having a central management team inhibits product teams’ ability to innovate and experiment with new Jenkins plugins or processes without first receiving change or update approval. The central team, in turn, often struggles to keep up with requests and update demands from the organization.

The second approach involves each team managing their Jenkins master and agents on physical/virtual hardware. Individual team management solves a lot of the issues associated with configuring plugins and understanding what each team needs to build and deploy software. However, the problem of scalability is still very present. The success of this approach also requires each team to have the time and skills needed to manage a Jenkins master, Jenkinsfiles, and the underlying infrastructure of the CI pipeline. With variable CI/CD pipelines, consistency also becomes a major challenge. In other words, multiple variations of deployed/released code become extremely difficult to manage in a streamlined manner across an enterprise.

Regardless which approach is used, organizations that use physical hosts or VMs may either overprovision resources or underutilize hardware, incurring unnecessary costs as a result of pre-purchasing compute power to build the physical hosts/VMs. It’s a guessing game: either you have more than enough compute resources, or your Jenkins builds will queue. CloudBees, a licensed version of Jenkins, attempts to solve the Jenkins scaling problem associated with both approaches. However, it doesn’t enable burstable scaling of Jenkins masters/agents. It also has licensing costs and is not open source.

In addition, we believe organizations should run their Jenkins infrastructure using a container-based approach on Kubernetes. Containers increase the speed of delivery by offering developers a mechanism for defining their infrastructure as code with high fidelity between development and production environments, which supports efficient CD pipelines. Workload availability increases through the ability to rapidly respond to additional load or failure by quickly scaling through the launching of additional lightweight containers. Finally, operational costs are decreased through higher density of workload deployments with multi-tenant container orchestration platforms such as AKS, EKS, GKE, and OpenShift.

I’ll start with some assumptions:

Here are some key recommendations:

When an Enterprise Should Consider Using Ephemeral Jenkins Masters

An enterprise should consider using ephemeral Jenkins masters in the following two scenarios:

We recommend implementing ephemeral Jenkins masters/agents for each product/business unit using Kubernetes. Engineering teams will have more autonomy and control over how Jenkins instances are configured in terms of plugins and availability while also maintaining a base level of standardization regarding how Jenkins is configured. The current DevOps tools team will also be able to better scale Jenkins across the enterprise.

Masters and agents will run in containers on Kubernetes. Here are some guidelines to follow:

In my next post in this series, I’ll have much more to say about implementing Ephemeral Jenkins masters with Kubernetes. Until then, reach out if you’d like to learn more!